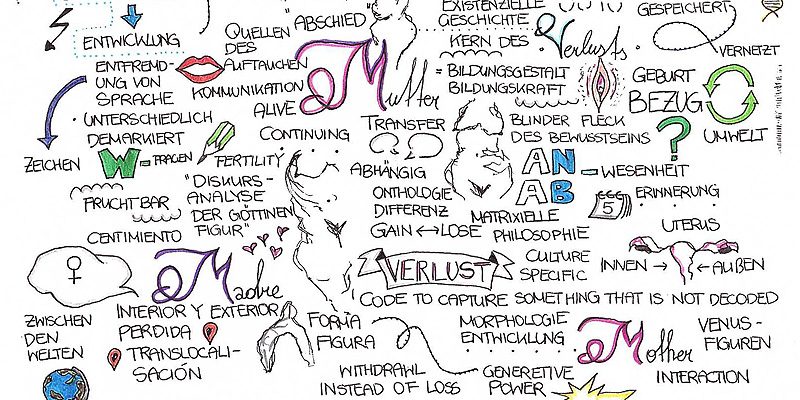 the set of all kinds of mothers

Starting from the category “the Matrixiale” or “the set of all kinds of mothers”, my research faces the challenge to take a closer look at the phenomenon / signifier goddesses. Under goddesses here the sacred female is understood or a genus determined by the developmental force or creative and creative power, to which the numinous is attributed. The mystery of the female deities is considered in this respect on the basis of the special position of the mother, which has far-reaching ontological consequences, i.a. the fact that her body is the interface between worldliness and worldlessness.

Project A: Demeter galaxy in discussion

This subproject consists of critically analyzing the interpretations and attributes previously attributed to the goddesses in the context of culture. For the figures of the goddesses, this discourse-analytical critique requires, on the one hand, an archiving and arranging work oriented to their properties and structural features, and, secondly, a critical hermeneutic view of the attributes given to them: beauty, love, fertility, etc.

The discursive point of this analysis is a critical look at the relationship between the goddesses and the symbolic order of mothers. Under which knowledge systems does the talk about mothers take place in the history of culture? In this research it is argued that the mother-signifier strongly influenced the symbolic order of a culture. The question is what this signifier stands for. In this sense, this research seeks a revision of the speech order of the mother myth and the matriarchal theories, and above all a corresponding re-evaluation of the mother institution or regulated by mothers social and economic systems.

Project B: A Morphogenetic Interpretation of the Venus- Phylum: The Numinose Female as a Symbolic Différance

In this respect, the point is to distance oneself from the positivistic order of representation in which the figures express one-on-one their particular truth with regard to the emphasized and prominent features of the figurines, and to find a morphogenetic explanation for the phylogenesis of the goddesses. For this purpose special attention should be paid to the morphology and figuration of the Venus figurines of the Paleolithic Age or to the essential features of the whole of the art object.

The aim of this project is an aesthetic contextual reflection between the symbolic individuation and the figuration of the art object. It succeeds by a morphogenetic reading of the figures and patterns of the Venusfigurinen or an analysis of the development of the morphological singularities of the figurines in the course of history, where it can be assumed that the emerging features illustrate a symbolic difference.